“Next stop, Big Wave Beach” said Paulo, our driver for the day, ushering us back to the car.

“They may not be that high right now though”, he interrupted my musings. “It depends on a lot of factors – the season, the tides, the overall weather patterns”.

“Well yes, but I’m guessing a beach that’s called Big Wave Beach would have waves that are on average higher than most waves though, no?” I persisted.

“It’s surfing terminology. The actual name of the beach is Praia do Norte Beach, but this is where the highest recorded wave was surfed“.

“How high are we talking?”

Paulo turned around and looked at me with pride. ”111 feet”.

“That’s 10 storeys tall! So, I guess, we’ll be seeing waves that are, what 5-6 feet at least then?” That would be something, I thought.

“Like I said, it’s difficult to say”, said Paulo. “They are usually higher in the winter, but what the surfing conditions are like on any given day, one can never tell. Do you surf?”

I wish I could say yes to that question. There is a purity, an almost meditative quality that I sense about surfing, completely at odds with the obvious thrill and adrenaline pumping action that it otherwise entails. To be caught in the curl of a beautiful wave would be an otherworldly experience, one that I am doomed to never experience in my lifetime.

I was in two minds now. Did I want to go to this place? A place that was known for something that I could never, ever, fully appreciate? At a time when it may not even be at it’s superlative, hyperbolic best?

Oh well, we travel this way but once, and all that.

As we drove through the older part of Nazaré town, called Sitio, I looked up at the bright blue sky that had become the harbinger of impossibly good weather on our trip. From an overlook point I could see the South Beach, running alongside the promenade that was the centre point of this erstwhile sleepy village, home to numerous sun aficionados every summer. The tamer cousin to the wild North Beach, the South Beach is for sunning, and swimming and all those sedate beach activities one usually associates with a beach town.

We crested a cliff and South beach fell away behind us. The road banked and we found ourselves driving towards a cliff face that ended with a walled complex that makes up the Big Wave Museum. 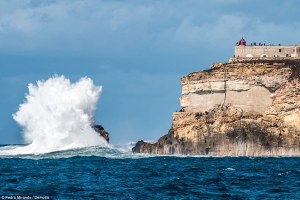 We stepped out of the car into a chilly gust of wind that ebbed and crested but never really died down. Gingerly making our way to the edge, we looked out to see North beach down below. 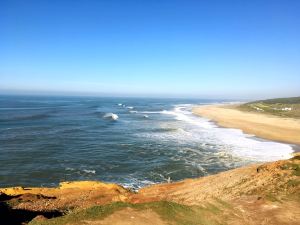 We waited for a few moments, trying to gauge the ferocity of the waves, but it didn’t look that this was the day to yell, “Surf’s up!” We saw a few impressive swells, but nothing like the monster waves that this place is famous for. 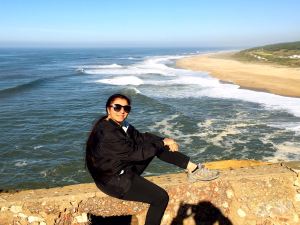 Emboldened a bit, we walked around to the rear side of the cliff that fell away to the water. 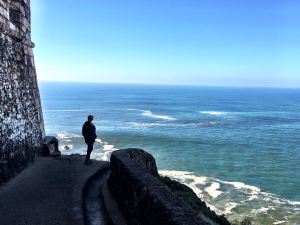 The surf was crashing loudly on the rocks below, and occasionally was powerful enough to send a few floating droplets our way. 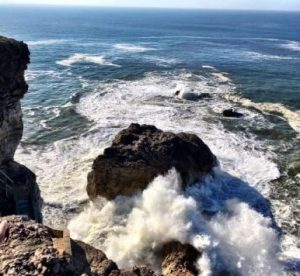 There is a scientific explanation for why Nazaré attracts these monster waves, and it is the same reason that allows other surfing hot spots their claim to fame. Just off the coast lies the biggest underwater ravine in Europe, called Nazaré canyon. This huge canyon runs 125 miles towards Nazaré, ending less than 1 km from the coast. It is around 3 miles deep at the deepest point and from there, it rises to almost 100-150 feet creating a headwall. This is the great depression that is responsible for those huge waves.

Every winter, severe storms in the North Atlantic give rise to large swells. As these swells approach the headland, their intensity is magnified as they first hit the depths of the ravine, before climbing up the headwall. Just before it reaches the coast, which is a mere kilometre away, the sea becomes shallow again, allowing for these swells to rear up and come ashore as giant waves. 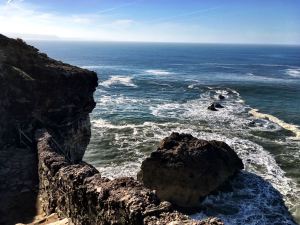 Time to see what the fuss what all about. We went inside the museum to see the video of that giant wave being surfed. 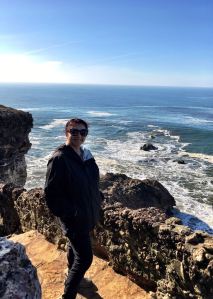 On a winter day, in January 2013, a Hawaiian surfer named Garrett McNamara rewrote the history books when he surfed that crazy wave. One feels the need to mention that the previous highest record that he broke was one he himself had set, surfing a 78 foot wave, at Praia do Norte, in Nazaré, two years earlier.

The video can be seen here

We watched the video, and there it was – context. I was at the spot where this event had happened. I could see where everything took place. I could see the point where the video was shot from. I could see where people would have been standing and watching this superlative surfer ride the wave of his life. And I could imagine the immense wall of water that would have risen up, and come towards the point where I was standing, dwarfing everything in its mighty wake.

Since then, the word is out, and every winter, surfing aficionados from all over the globe congregate at Nazaré, looking for that perfect swell, that moment of surfing zen. 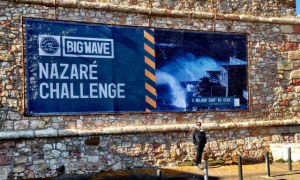 “Not today, the big waves, no”, murmured Paulo apologetically, as we made our way back to the car. No, definitely not today. But it might have been.

And as any surfer will tell you, the seeking is half the fun. 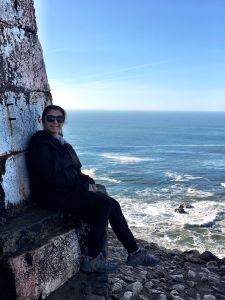 "For my part, I travel not to go anywhere, but to go. I travel for travel's sake. The great affair is to move." - Robert Louis Stevenson
Loading Comments...
%d bloggers like this: