Homesickness is a funny thing. It can strike you when you least expect it, without warning and more importantly, without any earthly logic.

Walking out from the Hassan Mosque in Casablanca, having spent a considerable amount of time marveling at its architectural wonders, we make our way back to the car and drive off. The promenade near the sea soon gives way to a rough pile up of rocks. The sky has turned grey and overcast, and a not unwelcome cool breeze is beginning to buffet the loose shawl covering my bare shoulders.

And then I spy it. Sitting there, amidst a pile of rocks, almost suspended in the middle of the ocean. And nostalgia strikes a full body blow, more so due to its very unanticipated occurrence.

I am told it is called the Marabout de Sidi Abderrahmane. Clearly, it’s not the tongue twister of a name that has done me in. What has is its location, reminding me of Haji Ali, the mosque suspended in the middle of the sea off the coast of my very own Mumbai. 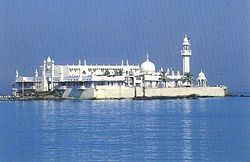 Here are the same higgledy piggledy piled rocks, the exposed pathway at low tide that allows one to step into a place of worship, made all the more special by the fact that access to it is granted by natural forces alone. I believe there is now a pedestrian bridge that has been built to access the site, but I think the clambering over the rocks made for a more interesting experience.

I have been just once to Haji Ali, and that too to the outside durgah or courtyard, as non-Muslims are not allowed into the mosque. I ask the guide if I can go in here into the tomb, and she nods yes.

In a snap, I am off and away, crossing the slippery rocks, while a grandmother and three kids look on contentedly. The inside is plain and small, and there’s no one else, but something stops me from reaching for my camera to snap off a quick one.

Sidi Abderrahmane was considered to be the patron saint of epileptics and the mentally afflicted. In fact, his nickname was Al Majthoob, which means “mentally retarded” in Arabic. It is a spot of pilgrimage for hundreds of families who believe it to have special healing powers, especially for women who are trying to have a baby. There are also rumours of sorcery and witchcraft associated with the site. The tomb itself is in question as there are also similar claims to his being buried in Meknes.

Having paid my respects, I walk back to the car with a bemused husband and guide in tow. As we drive past a KFC and Mcdonalds doing brisk business in the early evening, I ruminate about how apt my visit really was. After all, isn’t nostalgia and homesickness a very special kind of madness ?

What   : Tomb of a local cleric in the midst of the sea.

Where : Located halfway along the Corniche between the Rotunda Blvd Ocean Atlantique and the Morocco Mall.

When  : During the day, before sunset.

Do       : Be prepared to be approached by touts and fortune tellers hanging around the site.

Don’t   : Take photographs within the shrine. Respect the religious sentiments governing the site.

"For my part, I travel not to go anywhere, but to go. I travel for travel's sake. The great affair is to move." - Robert Louis Stevenson
Loading Comments...
%d bloggers like this: